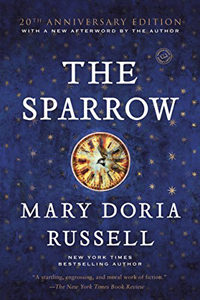 In 2019, young Jimmy Quinn gets a job babysitting the Arecibo radio telescope in Puerto Rico. One of his less important tasks he feels is to monitor any signals that may show up from deep space. Needless to say, things get very complicated when, quite unexpectedly, he finds them. And it’s not just some unexplainable static, some random noise, or some ill-defined secret code. It’s music: sophisticated choral music that sounds remarkably religious. He informs his superiors, and the world reacts with excitement to the discovery of what must certainly be the first hard evidence of sentient extraterrestrial life. But no nation, no organization is ready to do much about it… except for the Jesuits. They do what they’ve done since their inception. They send a band of missionaries to explore the place.

The mission succeeds splendidly. The members of the team get along very well; the trip to the planet is relatively without incident. Rakhat, the world which is the source of the music, is identified and turns out to be a hospitable place, with breathable air, drinkable water, and at least two different intelligent species, both relatively friendly. Sandoz learns their languages quickly. The earthlings and the inhabitants of the new world communicate and seem to understand each other. All is going well.

Except I’m telling you the story as it begins in Chapter two.
Chapter one starts with Sandoz returning to earth in disgrace decades after the mission departed. The rest of the team is dead. He is accused of terrible crimes on Rakhat including the cold-blooded murder of a child. And he is required to face an inquest that he simply is in no physical or emotional condition to tolerate. “What happened?” they want to know. What went wrong, and are the criminal acts he’s accused of without any explanation or excuse? Sandoz doesn’t want to answer any questions or talk about it.

The members of the Jesuit team charged with getting Sandoz’s story are a divergent group of priests, and it’s a long, painful process. But in the end, little by little, Sandoz endures the torture of telling his story and helping everyone, including the reader, learn the incredible misunderstandings that led to the tragic outcome.

THE SPARROW already a classic now in its 20th-anniversary edition is still a terrific story. But, perhaps, more importantly, the author, Mary Doria Russell, tries to deal with the whole question of God and any role he might play in all of this. It’s the same question that might be asked by any believing person in a time of great suffering, or of any missionary effort carried out with people of another culture. Of course, if God is no more than a nonentity, a disinterested third party, or as Woody Allen calls him a real underachiever, none of this matters. But to the Jesuits and the members of the mission and any person of faith, it’s one of the core issues of existence and needs to be addressed.

In any event, as I’ve said, questions of theology aside, it’s still a terrific story. FIVE STARS.