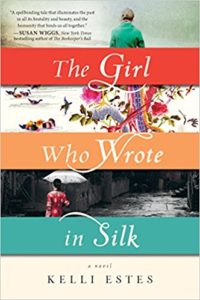 Two intertwining stories told at once. In the 1850’s Mei Lien, her father and grandmother are forced from their home in Seattle and are loaded on a ship headed for China. Even though she was born in America the locals want her and all people of Chinese descent out of their country. The Chinese Exclusion Act has just been passed and (now that they’ve helped build America’s Railroads) the Chinese find that Americans have no use for them. In fact, many Americans HATE them!

Things get worse. Onboard the ship Mei Lien hears Captain Duncan Campbell conspiring to dump all the Chinese passengers into the sea, drowning all of them. In terror, she tells her father and he does, perhaps, the only thing he can do to save her… he pushes her off the ship himself while they are still in sight of land and she can swim to shore.

Mei Lien gives in to despair, expects to drown, feels the water pulling her under, becomes unconscious, but she wakes up in the bed of a strong, Joseph Irish American who soon falls in love with her, marries her, gives her a home on Orcas Island and a son. Unfortunately, their home is right next to that of the same Captain Duncan Campbell who dumped her family and hundreds of others into the sea. He still hates the Chinese. And he wants their land and will do almost anything to get it.

Story two, current day, Inara Ericsson, the great, great, great granddaughter of that same Duncan Campbell, has just inherited her aunt’s home on Orcas Island. She wants to turn it into a boutique hotel. She borrows the money to get started from her father even though he is very skeptical of her chances for success. As Inara walks through the home she finds a loose board on the stairway. It opens to a small hiding place and in it she finds the sleeve of a garment, probably a ceremonial robe, highly embroidered with images.

Inara struggles to interpret the meaning of the sleeve. She enlists the aid of Daniel Chin, a professor of Chinese studies at the University of Washington. He’s Chinese himself, of course, and together he and Inara eventually learn that the images embroidered on the sleeve depict that terrible moment when Inara’s grandfather’s dumped his Chinese passengers into the sea. Little by little they also piece together a picture of Mei Lien and her fate. But with that understanding comes the realization that Inara’s great-grandfather who is now a hero to the town and her own family was really a racist and a mass murderer.

Kelli Estes displays impressive skills dramatizing the tragic events that surrounded Mei Lien’s life and the atmosphere of hate which Chinese people had to endure in American. She doesn’t do quite as well with the lighter moments or the important love stories in the novel. Things happen almost too quickly, conflicts arise and resolve themselves in a few pages. There are monumental coincidences that especially make the modern day story feel more like a poorly written romance novel. In the end, we’re left with a strong sense of appreciation for what the Chinese immigrants and their families went through in 19th century America and the horrors, prejudice, and hatred they had to endure. But in the end, this feels like a weak, too easily resolved romance novel overlaid on a well-written dramatic portrayal of tragic historical events.