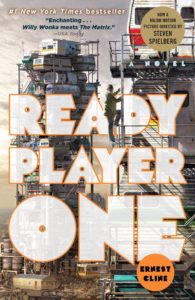 This is homage to the 1980s and the evolution of video games, to Ferris Bueller and the films of John Hughes, to Ladyhawk, to Monty Python and the Holy Grail, to the TV series Different Strokes, to the Atari and the Apple II, to Packman, Joust, and Zork, and especially to the early console game called ADVENTURE.

In the world of the not too distant future (2044) the energy crisis, global warming, etc. have made America so miserable that cities are crumbling, most people are out of work, many live in trailer parks where the trailers are piled one on top of the other, and everyone spends their time escaping into a fabulous, free, virtual reality simulation called THE OASIS. It’s a universe really, with thousands of planets to explore, a great educational system, endless adventures, quests, friends to meet, and places to hang out.

James Halliday, the recluse who spent most of his adult life programming the Oasis, dies. But not before he releases a video that starts a new quest game. Anyone who can find three magical keys, unlock three hidden gates, and solve the game can win Halliday’s immense fortune and absolute control of the Oasis.

Thousands of people play the game and compete for the mega-billion dollar prize. But an unscrupulous corporate entity, Innovative Online Industries also enters the competition. IOI wants to take control of the Oasis, make it more corporate, and limit its users by charging fees and changing its character. Of course, IOI is up against most of the geeks of the world, and one of these, named Wade (just a skinny antisocial kid living in a trailer park in Oklahoma City) is so obsessive, so dedicated, and so damn smart that he becomes their main competitor.

The novel takes us in and out of the virtual world, inside video games where the mazes become real and the monsters are more than formidable. Wade is up to the task because of his ability to plan, to think through problems, to get lost in his gameplay, and because he is such a profound geek that he’s already played all the games, seen all the movies, memorized all the dialogue, hacked all the hacks, and almost knows how to talk to people in the outside world.

There was a stunning moment of realization for me when Wade hacks into the mainframe of the systems of IOI, steals all their data, and reprograms most of their software. It gave me a sudden sense of the power and exaltation that hackers feel as they pursue their objectives knowing that they actually have the skills to modify or even bring down a great computer system.

Fortunately for the world of the Oasis, Wade is a good guy who is humbled by his success, and who meets an equally geeky but powerful and driven girl, and falls in love with her. This sets up what is perhaps the greatest moment of innocent geek romantic dialogue ever written. All short sentences, lots of sly smiles, pregnant pauses, and uncertainty… but somehow (amazingly) it ends with a kiss.