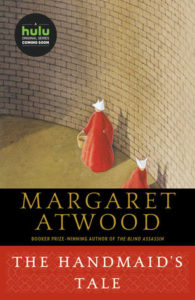 WARNING. Even though this book was written decades ago, the reader might be well advised not to read it and current headlines of the early 2017s at the same time… it’s just too damn disquieting.

But, what a piece of work: a post-apocalyptic novel in which toxic waste, pollution, nuclear power plant meltdowns, and leaking chemical weapons programs and sexually transmitted diseases lead to massive problems for humanity including a dramatic decrease in the birthrate. International superpowers sign accords allowing each nation to do whatever it feels is necessary within its borders without external interference.
In the US, there is a coup. A group calling itself the Sons of Jacob stages a rebellion and executes the president and all of the congress. It suspends the constitution and institutes a patriarchal society based on a hard-line, militaristic interpretation of Christianity. Their purpose is to clean up the natural and moral decay and get the birthrate up again.
Books are burned, families are broken, especially if it’s a second marriage, and children of those marriages are sent to foster homes. The Commanders of this new world order live in palatial grandeur but must adhere to the puritanical laws of the new society. Secret police called “The Eyes” enforce the strict laws even if they must arrest and execute the Commanders or their wives in the process.

Women are subjugated, not allowed to read, stratified into groups, and wear costumes assigned to their station. Wives of the big shots wear blue, women who are cooks, maids, servants, etc. (called Marthas) wear dull green, wives of the poor families wear gray. And, because there is such a shortage of babies, young women, especially those who were wives in second marriages, become birthing surrogates called Handmaids. Of course, artificial insemination is outlawed, as is abortion, newspapers, magazines, makeup and the like. So the job of these women is to become pregnant by the commanders through bazaar sexual ceremonies involving the commander, his wife and the Handmaid.

All of this is revealed through a single fist person narrative told by one of the Handmaids. We never learn her name; she is simply called “Offred” (Fred is her commander so she is “of Fred.”) Her job is to get pregnant and provide her commander and his wife with a baby, which the wife will raise. Once “Offred” does deliver, she will move on to another commander and do likewise. If she is incapable she may very well be executed.

Lucky for us readers, the teller of this tale is a sharp young woman, with a keen sense of survival, heightened awareness, a strong, often sarcastic sense of humor, a healthy sexual appetite, and a cunning mind in spite of tragic nearly debilitating experiences and memories. These very same traits probably operate against her as she is confronted with the illegal, self-serving plans of her commander and then (separately) of his wife, as well as the members of a secret resistance force called Mayday.

The Handmaids Tale gives us “Offred’s” most intimate thoughts, fears, and desires up to the story’s climatic confrontation. It’s all told in her sharp, bitter, first person narrative. And then, as an added twist, the final chapter of the book gives a historical perspective on the tale. It’s presented as a lecture given over a century later by scholars who have found the narrative and try to use it to understand the society and the fate of the handmaid herself.