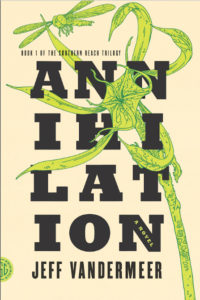 “Maybe, in the end, it’s the voice that tells the stories, more than the stories themselves, that matters.” ― Stephen King, It

And that’s what bothers me about this book. By the time it’s finished, as the biologist drones on and on about scientific details, about her bland and uninteresting life, about her need to be alone, and especially about the indescribable phenomenon in area X which she can’t help but try to describe ad infinitum, I want to join with everyone else who wants to shoot her. I mean I do like her as a person (after all she’s Ghost Bird) and I’ve known a lot of people like her but still…

A strange biological phenomenon has taken over a part of the country and it has replaced all life in the area with its own unique habitat and inhabitants. The government has sent several study groups into the area to learn about it, and many of the groups have had terrible endings. The current group is made up of four women all specialists in an area of science. The narrator is the biologist and her husband had been on the previous expedition. He died. Near the very beginning of the exploration the members become distrustful of one another. Gradually the biologist determines that there is more to the mission and the events of previous expeditions than they have been told. And then people start to die.

I think the basic story of area X is interesting, sort of a pre-apocalyptic work. The slow reveals of the facts about the place are clever, the hidden surprises are good, and I think the ending is strong. I’ll admit that I listened to the audiobook on this one and I found the narrator, Carolyn McCormick,especially cold and dry. I kept asking myself if someone else had been the narrator (or if I had just read the book itself) would it be any better. I don’t think so.

Sorry, Ghost Bird, I value the relationship you had with your husband. I marvel at your powers of observation. I’m impressed with the discoveries you made and your courage in making them. But DAMN couldn’t you have put a little more life into it?