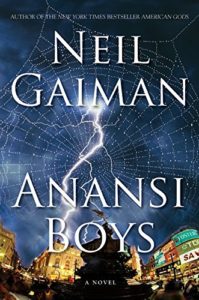 What a generous, inventive, funny story! What original, unanticipated characters. What a refreshing collision of British and Caribbean customs, styles, idiosyncrasies and nonsense. There are bad guys, monsters, murder, and ghosts. Fat Charlie—the hero—is a bumbling, self-conscious accountant who’s been blessed with a great singing voice but is afraid to perform in public, even when singing might solve all his problems.

He has a brother he never knew, one who has all the charm Fat Charlie lacks, one who impresses Charlie’s girl more than Charlie ever could, one who pretty much steals her away from him.

Okay, so the boys are the sons of a god. But their father, Anansi, is only a spider god from some primitive animal-worshiping religion as old as time. Still, it turns out that—in the pantheon of primitive animal gods—the spider god is a big deal… a charmer… a trouble maker who has pretty much pissed off all the other animal gods at one time or another. Tiger (the sublimation of all great cats), especially hates Anansi for lots of reasons but especially because the spider god is a teller of stories. In fact, the truth is that all really good stories were in some form originally Anansi stories. Before that, they were dull and miserable Tiger stories.

ANANSI BOYS tells what happens when the two brothers meet each other and have to contend with the fact that their father has died as all gods must, at least temporarily. Then comes the murder, embezzlement, a slimy disgusting villain with several hidden chambers where he can imprison and possibly even murder his victims. There’s a creeping, terrorizing shadow-creature that stalks everyone in the darkness. But there’s also a dedicated, brilliant, sexy policewoman who takes an interest in Charlie and the criminal events that ensnare him. And there’s all that Caribbean sunshine, lilting tunes and melodic speech. As much fun as this book is to read, the audio book may be even more enjoyable because the narrator delivers all this wonder in a mix of British accents and Caribbean voices too… as needed. I found myself listening to a series of chapters in the audio book and then go back and reading the text again just to appreciate both forms.